Vero Is Our Hero

Want to do Orlando but don’t want to overdo it? Here’s a bit of real magic: You can combine a visit to a dreamy seaside town with a dip into Walt’s world. 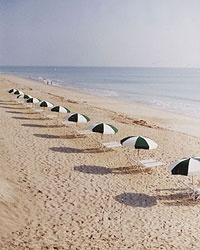 Perhaps you’re not aware that you don’t have to stay within a 10-mile radius of Disney World to visit Disney World. Perhaps your kids have been telling you otherwise. But the truth is that you can actually park yourselves at a place where hyper hordes of children are noticeably absent. A place where there’s an enormous body of water that wasn’t created by man or machine. A place where you can experience simple pleasures instead of sensory overload. A place like Vero Beach.

Two hours by car from Orlando on the Atlantic Coast, it’s dubbed Velcro Beach because no one wants to leave its crowd-free white sand. But Vero is more than just another pretty beach: It’s got personality. Make that multiple personalities.

Funky Vero
The town was an overlooked seaside hamlet before farm-equipment salesman and do-it-yourself developer Waldo Sexton left his imprint. In 1934, he built the Driftwood Inn Resort (3150 Ocean Dr.; 772/231-0550; www.thedriftwoodresort.com; doubles from $140), a rambling oceanfront beach house turned motel turned resort-timeshare. Local legend has it that Waldo constructed the place without an architect or plans—he just shouted orders to his carpenters. The original building is a fantastical marvel of driftwood and rough planks hung together in crooked harmony and embellished with stained glass, Victorian tiles, and giant bells.

To see more of Waldo’s collections, stroll up the beach a couple of hundred paces to the Ocean Grill (1050 Sexton Plaza; 772/231-5409; www.ocean-grill.com; dinner for four $110), where you can sample broiled pompano amid an array of carved and studded old doors.

Cushy Vero
For a hotel with the works, check in to Vero Beach Resort (9250 Island Grove Terrace; 407/939-7540; www.disney.com; doubles from $290), Disney’s only Florida hotel not at Disney World. Here fun can be had in a head-spinning variety of ways, from mini golf to catch-and-release fishing.

Disinclined to be part of Disney’s or Waldo’s world?Consider renting a place. The pickings at www.floridavacations.com start at $4,000 a month for an oceanfront condo.

Natural Vero
The town is situated on a barrier island, which explains why it has an ocean for a front yard and a river for its back. The Indian River is a haven for manatees, dolphins, egrets, and herons. Spot them on a kayak excursion: two outfitters—Kayaks, Etc. (772/794-9900) and Orchid Island Rentals & Sales (772/234-3436)—will set you up with equipment or lead you on a tour. McKee Botanical Garden (350 U.S. Hwy. 1; 772/794-0601) is the place to see native and exotic plants, plus lots of scurrying lizards. Hike its jungly trails before you hightail it back to Velcro Beach.

Amy Paulsen, former editor of TimeOut New York Kids, and her family were happily stranded in Vero Beach recently while their sailboat was readied for a transatlantic voyage.
Believe it: You can do Disney World (disney.go.com) in just one day. If you hit the road by 7:30 a.m., you’ll get there shortly after the gates open at 9 a.m. Park at Epcot and make a beeline for Soarin’, the attraction that makes you feel as if you’re hang gliding over land, sea, and, for some strange reason, golf course. Then take the monorail to the Magic Kingdom for a several-hour whirl. Have dinner back at Epcot (recommended: the onion soup gratiné at Chefs de France). Then it’s good-bye hoopla, hello Vero.

Your guide to the best Indian River County beach reads

There is nothing better than reading a good book on a beautiful day at the beach. Vero Beach and Indian...